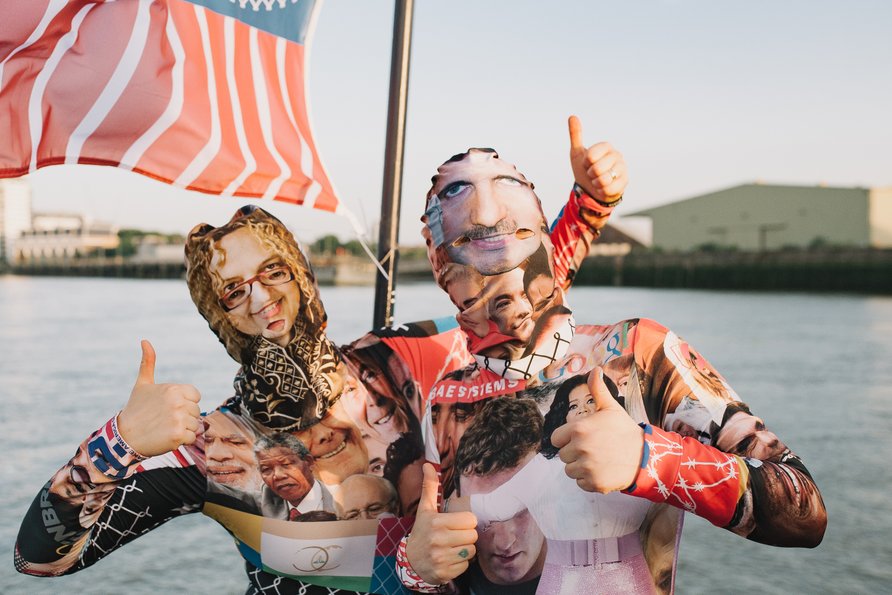 UK iParty for Human Rights, aboard the CensorSHIP

Hackney Wick-based gallery arebyte and creative think-tank Desearch Repartment will host the UK iParty for Human Rights, a floating workshop and tour with a party atmosphere, on the Thames, on the summer solstice (Wednesday 21 June 2017). Taking place aboard the CensorSHIP, the UK iParty for Human Rights will guide participants through a series of playful and satirical activities designed to provoke a re-evaluation of human rights and contemporary global politics.

The enlightening boat tour will travel along the Thames from Westminster Pier to Trinity Buoy Wharf. During the captivating workshop participants will engage in numerous activities like interactive pedagogical games to test their mettle – such as ‘Human Rights Against Humanity’, YAGA (a ‘new ancient spiritual exercise tradition’) and editing the Geneva Convention with permanent markers.

A drastic shift in perception and a permanent suspension of disbelief is now required to exist in today’s perpetual ‘State of Exceptional’. Desearch Repartment’s methods will give attendees a leg up on learning perceptual skills and strategies to survive in the post-truth hyper neoliberal world, or what DR calls Neo-Lived Realism.

The captivating three-hour boat tour of the city will reveal the Neo-Lived Realism embedded in London’s architecture and history and what that means for the UK’s durational futures. The tour will interpret London’s artistic monuments and historical sites through the lens of Desearch, revealing the unknown unknowns hiding in plain sight. With fascinating and edifying discoveries into the political and social fabric of the city, the tour promises surprising insights for the longtime Londoner and tourist alike.

The absurdly playful environment of the UK iParty for Human Rights aboard the CensorSHIP will be enhanced with signature cocktails (“Reverse Titanic” and “Blood on Your Hands”), a logo wall perfect for taking selfies, a melting iceberg sculpture and a karaoke sing-along to all the hits from the Guantanamo playlist. The party will also feature a guest lecture by post-media savant Blaise Otium who will conduct a process of rapid guessing which will offer clues on how to flourish in the ever-changing political and geophysical landscape of our current world.

Blame it on my ADD: on Desearch Repartment’s Quixotic Autopoiesis

In their 1972 treatise The Tree of Knowledge: the Biological Roots of Human Understanding,Chilean biologists Humberto Maturana and Francisco Varela made a lasting contribution to the understanding of both cellular biology and human consciousness by looking to a 400 year-old novel and its protagonist’s central tension. Trying to describe accurately how a cell reproduces only more of itself, with its own self-perpetuation in terms that would outstrip what mere magnification and DNA analysis would allow, Maturana and Varela looked to that most failed poet and lacklustre warrior, Don Quixote, and his anxious conundrum of whether to follow a life of action (praxis) or one of letters (poiesis). Hence the cell, rather than a building block of a larger, more significant body, is deemed an autopoietic machine, organized as a network of production which regenerates and realizes the very network of processes that produced them – furthermore, the machine is continuous with the topological domain of these processes.

A generation after Maturana and Varela, literary theorist Jerome McGann posits that an autopoietic system is a closed topological space that “continuously generates and specifies its own organization through its operation as a system of production of its own components, and does this in an endless turnover of components" (McGann, “Marking Texts of Many Dimensions,” 2000). Ok.

We will not linger long on Cervantes and his bio-theoretical fanboys, but imagine this as the place of the artist or citizen in our own time: in the flux and excess of Internet knowledges – video and the two-dimensional digital image primarily, but also text, always text – when did you decide to put down the shovel or the sword or the mop, and pick up the iPad stylus or remote control? Did the former implements ever even have a chance? Is the labour of understanding or the labour of avoidance your primary task?

In Desearch Repartment’s rooms of flags and movable texts, workshops, bus tours, boat parties, sticker emojis and Status Quo Elements™, what is being produced and for whom? How do we know when the joke is on us, and when it is on the world external to us as viewers?

Quixote, driven “mad” by excessively reading chivalric literature (paperbacks, TMZ), famously embarks on a life of “action” so contorted and cradled by textual influence, that the landscape of his imagination and the borderlands of his material life as a knight – venturing forth to right wrongs in the “real world” – become irrevocably blurred. Are you looking at this on a screen or in the print catalogue? Are you reading it aloud? Whom are you with? Whom would you rather be with? What is in front you, and what is behind? Do you long for a world before the Internet, before all hope of extrication from its propagandistic grasp was dashed by the permutated State of Exceptional™ in which we so interconnectedly hover?

Since its earliest iteration at Documenta in 2007, Desearch Repartment has engaged in sometimes sly, sometimes bombastic versions of autopoiesis. For the Desearchers, the machinations of profit and institutionalized state violence are considered not as ancillary but rather as coextensive with the economics of the art world – an allopoietic system because its

outputs, money and power, cannot be made from and through its own components, or at least not entirely. DR’s Status Quo Elements™ and self-sustaining/carceral stateofexceptional.com are the self-perpetuating viscera of a corporation in its oldest etymological sense: a body, without organics.

“Define irony,” Steve Buscemi’s serial killer inmate Garland Greene asks rhetorically in British director Simon West’s 1997 masterpiece Con Air. “A bunch of idiots dancing on a plane to a song made famous by a band that died in a plane crash,” he answers. The song is Lynyrd Skynyrd’s “Sweet Home Alabama”,[1] a Budweiser-demanding tune that is itself a melodic

counterpoint to the poignant aria “How Do I Live without You[?]” (Diane Warren) used in pre incarceration Nicolas Cage’s flashback scene in the same action film. Made famous by LeAnn Rimes and Trisha Yearwood in recordings released the same year, the aria’s plaintive lyrics are as relevant today regarding the meta-textual miasma of the Internet as neo-liberal burning library as they were 20 years ago when addressed to a romantic interlocutor:

How do I live without you?

I want to know

How do I breathe without you?

If you ever go

How do I ever, ever survive

There would be no sun in my sky

There would be no love in my life

There'd be no world left for me

And I, baby, I don't know what I would do

I'd be lost if I lost you

If you ever leave

Baby you would take away

Everything real in my life… [2]

Thus, we return to Maturana and Varela’s Autopoiesis and Cognition: the Realization of the

A social system is essentially a conservative system. This is so because it is generated through the interactions of structure-determined autopoietic systems and operates as a medium that selects the path of ontogenic structural change of its components, which, thus, become structurally coupled to it. In our case, we as social beings generate, through our structure-determined properties, our societies as the cultural media that select our individual paths of ontogenic change in a manner that leads each one of us to the structure that makes us generate the particular societies to which we belong. A society, therefore, operates as a homeostatic system that stabilizes the relations that define it as a social system of a particular kind. (xxvii)

If, like Quixote, we have gone out into the world and been disappointed by how to make it better on our own, and returned sulking to our humble manse only to have our servants and local priest burn our library to bits, what is this world of letters that is left behind and this world of action that is our other potential path? Will we emerge from this archive fever only

to rail against wind power? Will we overcome our nostalgia for a time when we could be the heroes of our own story? Will our self-deception cease where our commitment to autopoiesis begins? Is there a gesture or a text that cannot be coopted for profit, control, or lies?

This is how I show my love

I made it in my mind because

I blame it on my ADD baby

This is how an angel cries

Blame it on my own sick pride

Blame it on my ADD baby

Blame it on my AD

Maybe I should cry for help

Maybe I should kill myself (myself)

Blame it on my ADD baby

So blame it on my ADD baby 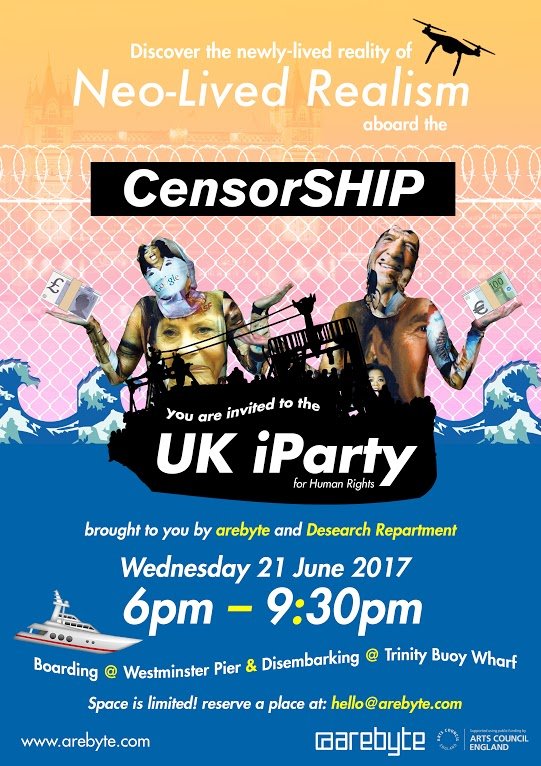 "The Magna Carta , which actually means 'the Great Charter of the Libertie', was signed on an island in the Thames, one of the first documents to guarantee civil liberties and justice, and is an important precursor to both the American Constitution and the Geneva Convention. But keeping it so close to water meant it has gotten moldy over time, much like the other great documents ruined by neglect.

Those old documents sure didn’t protect the people imprisoned on boats though. In the 18th and 19th centuries decommissioned vessels were used in Britain as prison ships or prison hulks. Before shipping convicts to the penal colonies their labour was used to develop and manage the Thames."  – Excert UK iParty for Human Rights

" the right you’ll see TATE Modern, home of Damien Hirst! It actually started it’s life as a prison and a deportation center and was later converted to an art museum. In the near future we are hoping to compress space and time Soon the old prison will be renewed and merged with the art museum  turning it into one of the founding sites of the Institution for Durational Futures, a merger between art and penal institutions. Soon all prisons will be eradicated and durational performance art will be more accessible to everyone!" – Excert   UK iParty for Human Rights

"Europe is like a sinking ship; it’s high tide and Captain May is ready to set sail on these current rough waters with the reliable and sturdy UK craft of nationalism! Set adrift towards brighter times on clearer waters, she’ll remake the UK into a sleek, responsive, minimalist yacht carrying a lighter load. The crowded, land-locked, immobile wreck of the EU will have to walk the proverbial plank alone. Adieu, Captain Merkel!" – Excert UK iParty for Human Rights